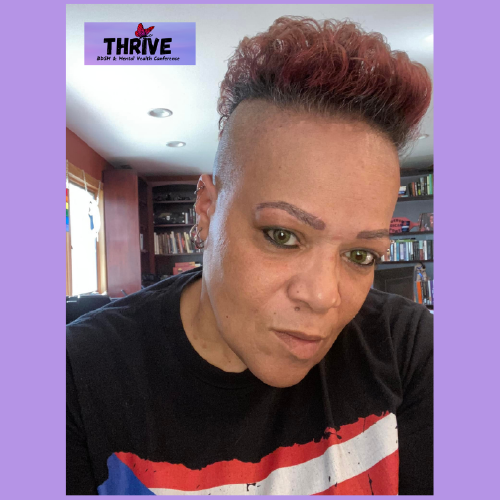 We are excited to host

One could say that Marialuisa Garcia, most affectionately known in the Leather community as Velvet-Storm, is a force that is authentic to their name: strong, frightening, ferocious, loud. And they wouldn’t be entirely wrong. There is a story behind their eyes. One of survival. A story that tells the tale of how a beacon of strength came to be.

Velvet was raised in a D/s household where their law enforcement mother was the Dominant in the home. The second child of three, their relationship with their parents was a rocky one. Velvet overcame a drug dependency while pregnant at 18: a dependency created to snuff out years of mental, physical, and sexual abuse from the age of five until they were disowned and displaced at 21. At the age of 24, they enlisted in the United States Navy, where they endured Military Sexual Trauma and as a result, contracted HSV and HPV.

The tattooed Jerseyan experienced their first taste of Leather in 1995 when their then partner took them to their first Folsom Street Fair in California. From there, they dedicated their time to working in the background: volunteering at events and conventions and working with LGBTQ+ organizations. During this time, they knew that something was not quite right mentally, and in 2014, they were finally diagnosed with PTSD, anxiety, and depression. With the support and encouragement of “Mama” Vi Johnson, it was then that they brought their mental health platform to the forefront, first running for and winning the Ms New Jersey Leatherwoman title in 2017, and then becoming the inaugural Leatherwoman of Color in 2019.

During their time in service to the Leather community and their titles, Velvet has served on many educational panels throughout the communities. Their belief to listen, learn, and communicate has been a position of prominence during the following meetings: The Lesbian Sex Mafia’s H(ER)Story, the 757 Spectrum Munch’s Puerto Rican and Leather panel, Philly Black Munch’s Serving from the Heart, MAsT Metro New York’s Impact of Mental Health, Widener University’s Annual Human Sexuality panel, and WiLa’s Leather Sistahood and Mental Health. They have also sat on the POC Leadership panel at the Master/slave Conference, and presented their class, Know Me previously called I’m Not an Angry Black Woman…I have Mental Issues, at Southeast Leather Fest, FLAME and Be The Difference Munch.

Velvet is the Co-Founder, Historian of the Mid-Atlantic Onyx Pearls, where they serve on the Public Relations Committee.  Besides volunteering for other organizations and community events. They are a Board Director BHT Foundation (formerly Brother Help Thyself), an organization that exists to help, build, and transform LGBTQ+ communities by providing financial support to local nonprofits. They are an Associate member of Vixxens leather club.

Though Velvet suffers from mental health issues due to the trauma from their childhood and their time serving the United States Navy, they and their Service Dog, Mr. Louie, continue to serve the community as much as possible. With an open-door policy where leatherfolx can reach out to them for support in the community, Velvet is an advocate, protector, fighter, and educator with a voice loud enough to fight the many  isms we face in our communities. But beneath that tough as nails exterior, there is so much more. Velvet is a mother, grandmother, aunt, sibling, and friend. A survivor who became a champion of our community as a whole - who has no plans to quiet their voice anytime soon.

Who will be presenting:

Join us as we welcome all of our friends back to THRIVE! Our first year was great and we hope this year we will exceed your expectations!

Thank you for your interest and your support of THRIVE! Because THRIVE is 100% free and not accepting donations, we ask that you pay it forward by donating to our speakers.

If you would like to support THRIVE’s efforts, consider picking up THRIVE swag at https://www.redbubble.com/people/DevynStone/